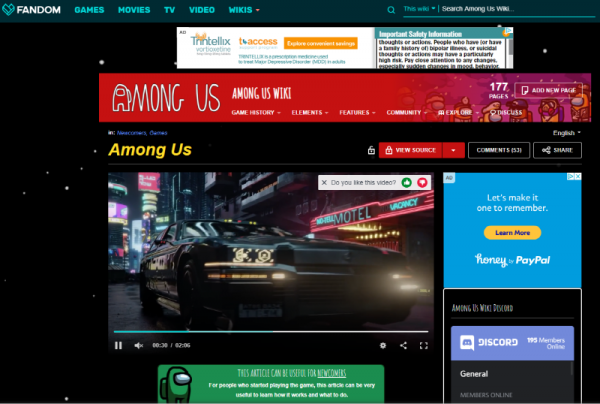 Developed and released on June 15, 2018, by InnerSloth, Among Us is a rising online, multiplayer game that can be played using both PC and mobile devices.

Among Us is a deduction, murder mystery game where Crewmates explore different maps and try to discover who the predetermined Imposters are, while completing a set of tasks to beat the Imposters, the Imposters try to kill off the Crewmates without getting caught. If either side succeeds, they win the round.

The game can take place on three different maps: the Skeld, Mira HQ, and Polus. The Skeld, designed after a spaceship, was the only map released in the game’s launch. Mira HQ is set in Earth’s atmosphere and was the second map to join the game. Finally, Polus is a large, purple planet set somewhere in outer space, where ransacked research laboratories and examination chambers can be explored.

Although the game was initially released in June 2018, the game’s popularity exploded these past several months due to video game streamers on Twitch, a video live-streaming service. On October 19, US Representative Alexandria Ocasio-Cortez tweeted “Anyone want to play Among Us with me on Twitch to get out the vote? (I’ve never played but it looks like a lot of fun).” Her live-streamed garnered a peak of 435,000 viewers, making her broadcast join the top twenty largest streams. But more than just to enjoy the game, AOC wanted to encourage her audience to vote for the presidential election. She directed her viewers to IWillVote.com, a Democratic party website with voting information, sharing “that’s really what tonight’s all about, and of course we are here to vote blue.”

The comment section of the tweet was filled with support and criticism for the idea. While some people praise Cortez for knowing who she is representing and how she encourages younger audiences to vote, others compare the situation to Hillary Clinton’s “Pokemon Go to the polls” statement and question why she is bringing politics to video games.

After the live stream, a hacker going by “Eris Loris” started to abuse the game’s chat feature to repeatedly make players send various messages that all include “TRUMP2020.” Although the situation has not been improved yet, InnerSloth say that they are aware of the situation and are trying to fix it.

BY KEVIN LEE and CHELSEA LEE